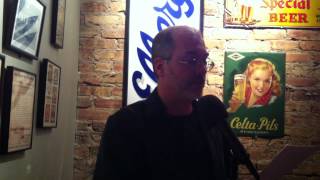 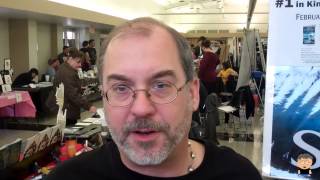 A wide selection of his short fiction has been collected in six short story collections - Sacrificing Virgins (Samhain Publishing, 2015), Deadly Nigh

John Everson is the Bram Stoker Award-winning author of the novels Covenant, Sacrifice, The 13th, Siren and The Pumpkin Man, all released by Dorchester/Leisure Books in paperback. His sixth novel, NightWhere, was a 2012 Bram Stoker Award Finalist. Other novels include The Family Tree, Violet Eyes, Redemption and The House By The Cemetery. His 11th novel, The Devil's Equinox, was released by Flame Tree Press in June 2019. He is also the creator of the characters Danika and Mila Dubov, now seen on the new Netflix series V-Wars, based on the books and comics created and edited by Jonathan Maberry.

John is also the editor of the anthologies Sins of the Sirens (Dark Arts Books, 2008) and In Delirium II (Delirium Books, 2007) and co-editor of the Spooks! ghost story anthology (Twilight Tales, 2004). In 2006, he co-founded Dark Arts Books to produce trade paperback collections spotlighting the cutting edge work of some of the best authors working in short dark fantasy fiction today.

John shares a deep purple den in Naperville, Illinois with a cockatoo and cockatiel, a disparate collection of fake skulls, twisted skeletal fairies, Alan Clark illustrations and a large stuffed Eeyore. There's also a mounted Chinese fowling spider named Stoker courtesy of fellow horror author Charlee Jacob, an ever-growing shelf of custom mix CDs and an acoustic guitar that he can't really play but that his son likes to hear him beat on anyway. Sometimes his wife is surprised to find him shuffling through more public areas of the house, but it's usually only to brew another cup of coffee. In order to avoid the onerous task of writing, he records pop-rock songs in a hidden home studio, experiments with the insatiable culinary joys of the jalapeno, designs book covers for a variety of small presses, loses hours in expanding an array of gardens and chases frequent excursions into the bizarre visual headspace of '70s euro-horror DVDs with a shot of Makers Mark and a pint of Revolution Anti-Hero IPA.

For information on his fiction, art and music, visit John Everson: Dark Arts at www.johneverson.com or Facebook at www.facebook.com/johneverson.

Either way, ALL of my novels and short fiction collections are available in both print and e-book editions via Amazon.co.uk. You can see my author profile there here:

MY PUBLISHER HAS staged a Blog Tour to support the release of Voodoo Heart this week, and the first few entries have been awesome. Readers seem to really be enjoying the novel’s mix of mystery and voodoo and horror! I’ll post excerpts and links here as the tour continues:

“If you don't feel the pointed things in life, you'll soon take the soft ones for granted.”
― John Everson, Cage of Bones & Other Deadly Obsessions
tags: roses, thorns
14 likes
Like

“The defining evidence that separates sex and murder is really only the amount of blood left behind on the bed. The amount of heartache afterward separates lust from love.”
― John Everson, Cage of Bones & Other Deadly Obsessions
2 likes
Like

“We never, ever believe the truth until it’s too late.”
― John Everson, The Pumpkin Man
0 likes
Like

April 2013: Which book would you like King to read?

Thanks for adding me! I really enjoy your stuff!

Thanks for the add, John!

A new book! Just in time for my favorite holiday too. I can't wait to read The Pumpkin Man and am going to tell everyone else they HAVE to buy it.

Your "Needles & Sins" just gave me the shivers!

Whoo hoo, I'm officially a fan now! What a nifty new button.. do you get to see who your fans are?

Reading and turning people on to Covenant! Can't wait to finish.

Hello John, I hope you are having a good day! =)