,
Discover new books on Goodreads
See if your friends have read any of Farzana Doctor's books

My poetry collection, You Still Look The Same, will be released in 2022. ...more

Six Metres of Pavement arose in a similar way--I had a sense of some of the themes, but the scenes just "arrived".

All Inclusive was similar, but I did a major revision after writing the book, after "hearing" a new character's arrival.

I think as I've become more experienced as a writer, I'm developed the story a bit more before doing the bulk of the writing. I don't outline, but as I embarked on writing my fourth book, I considered "what's this book about", "what am I trying to say", "who are these characters" before going forward. I did a lot of pen-and-paper early morning writing with this novel, writing scene after scene after scene in a notebook, for the first time in a long time.

So I don't see the whole thing playing out, but I do see scenes playing out.

Thanks for your question!(less)
flag
View 1 comment
Which writers have been your greatest influences in writing fiction?
Farzana Doctor So many! I read as much as I can (when not distracted by Netflix). Some of my fave writers are Zadie Smith, Barbara Gowdy and Gregory Scofield.
flag
View 2 comments
See 2 answers from Farzana Doctor…

Join me for some poetry this fall! Click on the links under the poster for info: 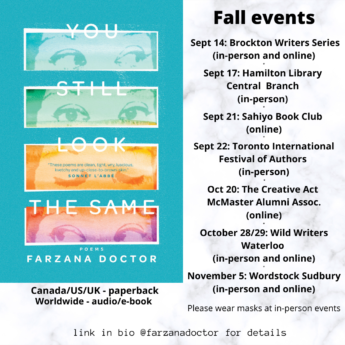 Hello Farzana. Good to see u on this website. Here is my final book, with a tremendous review by our mutual friend, Tarek Fatah. Would YOU consider writing one if sufficiently impressed?

My two new books for 2019 are:
1. Democracy, Deity & Death - A Discussion by Four Arabs (Austin Macauley - London): publication 25 June.
a story whose basic settings are real and could feasibly happen in the real-world.
https://www.austinmacauley.com/authors
2. Taaali ma3ee nulahiquhu ila Tunis - تعالي معي نلاحقه إلى تونس https://austinmacauley.ae/books/come-... - 45 Dirhams
Qais Ghanem Ottawa, Canada, if need qghanem2@gmail.com
===================================
These are the ‘Four Arabs’ who fill Qais Ghanem’s 130-page book with their opinions and discussions on ‘Democracy, Deity and Death,’ which is the sub-title of his book, but in essence, page after page, these four Arabs primarily discuss Islam as well as Sharia the 8th century laws whose weight has become the burden a billion Muslims today.
Every Muslim home should have a copy of ‘Four Arabs’ and they will find in it a reflection of the discussions all of us have, in varying degrees. Dr. Ghanem has done us all a tremendous favour and a service in using fiction to lay bare the truth we are told never to utter in public lest the ‘kufaar’ find a chink in non-existent armour.
Part of Review by TAREK FATAH , famous Toronto Author of Chasing a Mirage
=================================================
I highly recommend it to all who want to understand the Middle East and its three monotheistic traditions. It is both hopeful, in that the characters express hope for change, for the way in which the religions, and especially Islam, will find peace with modernity; and gloomy, in that the people being discussed still cannot let go of their great historical achievements, haven’t learned and are unlikely ever to learn how to use logic, and always fail to listen to each other, and so consensus among them is impossible! There are undoubtedly some minor exaggerations, but the writing is fluid, the momentum never wanes, and everything is all done so beautifully, with great dollops of heart-warming humour!
Prof. Abdulla Daar, author of Garment of Destiny, Toronto, Canada

All the best on All Inclusive's
U.S. release on August 5th
Farzana. I'll be cheering you
from beautiful British Columbia
this time. Cheers! Mo