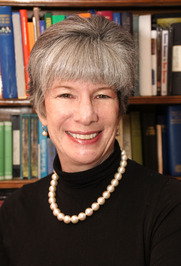 4.28 avg rating — 65 ratings
Quotes by Amy-Jill Levine  (?)
Quotes are added by the Goodreads community and are not verified by Goodreads. (Learn more)
“After a long and happy life, I find myself at the pearly gates (a sight of great joy; the word for “pearl” in Greek is, by the way, margarita). Standing there is St. Peter. This truly is heaven, for finally my academic questions will receive answers. I immediately begin the questions that have been plaguing me for half a century: “Can you speak Greek? Where did you go when you wandered off in the middle of Acts? How was the incident between you and Paul in Antioch resolved? What happened to your wife?”

Peter looks at me with some bemusement and states, “Look, lady, I’ve got a whole line of saved people to process. Pick up your harp and slippers here, and get the wings and halo at the next table. We’ll talk after dinner.”

As I float off, I hear, behind me, a man trying to gain Peter’s attention. He has located a “red letter Bible,” which is a text in which the words of Jesus are printed in red letters. This is heaven, and all sorts of sacred art and Scriptures, from the Bhagavad Gita to the Qur’an, are easily available (missing, however, was the Reader’s Digest Condensed Version). The fellow has his Bible open to John 14, and he is frenetically pointing at v. 6: “Jesus says here, in red letters, that he is the way. I’ve seen this woman on television (actually, she’s thinner in person). She’s not Christian; she’s not baptized - she shouldn’t be here!”

He returns a few minutes later with a man about five foot three with dark hair and eyes. I notice immediately that he has holes in his wrists, for when the empire executes an individual, the circumstances of that death cannot be forgotten.

The man, obviously nonplussed, sputters, “I don’t mean to be rude, but didn’t you say that no one comes to the Father except through you?”

“Well,” responds Jesus, “John does have me saying this.” (Waiting in line, a few other biblical scholars who overhear this conversation sigh at Jesus’s phrasing; a number of them remain convinced that Jesus said no such thing. They’ll have to make the inquiry on their own time.) “But if you flip back to the Gospel of Matthew, which does come first in the canon, you’ll notice in chapter 25, at the judgment of the sheep and the goats, that I am not interested in those who say ‘Lord, Lord,’ but in those who do their best to live a righteous life: feeding the hungry, visiting people in prison . . . ”

“No,” replies Jesus, “I am not saying that at all. I am saying that I am the way, not you, not your church, not your reading of John’s Gospel, and not the claim of any individual Christian or any particular congregation. I am making the determination, and it is by my grace that anyone gets in, including you. Do you want to argue?”

The last thing I recall seeing, before picking up my heavenly accessories, is Jesus handing the poor man a Kleenex to help get the log out of his eye.”
― Amy-Jill Levine, The Misunderstood Jew: The Church and the Scandal of the Jewish Jesus
15 likes
Like

“Jesus understood that God does not play by our rules. His God is a generous God, who not only allows the sun to shine on both the just and the unjust, but also gives us the ability to live into what should be rather than what is. The parables help us with their lessons about generosity: sharing joy, providing for others, recognizing the potential of small investments. His God wants us to be better than we are, because we have the potential to be. We are made but a little lower than the divine (Ps. 8.6; see Heb. 2.7); we should start acting in a more heavenly matter. Those who pray, “Your kingdom come,” might want to take some responsibility in the process, and so work in partnership with God. We too are to seek the lost and make every effort to find them. Indeed, we are not only to seek; we are to take notice of who might be lost, even when immediately present. The rich man ignores Lazarus at his gate, and the father of the prodigal ignored the elder son in the field. For the former, it is too late; for the latter, whether it is too late or not we do not know. But we learn from their stories. Don’t wait. Look now. Look hard. Count.”
― Amy-Jill Levine, Short Stories by Jesus: The Enigmatic Parables of a Controversial Rabbi
8 likes
Like

“Reducing parables to a single meaning destroys their aesthetic as well as ethical potential.”
― Amy-Jill Levine, Short Stories by Jesus: The Enigmatic Parables of a Controversial Rabbi
8 likes
Like

Is this you? Let us know. If not, help out and invite Amy-Jill to Goodreads.