Your reminder that you can now read Going Grey (Ringer book 1,) Black Run (Ringer book 2,) and View Of A Remote Country (anthology of my short stories) on Kindle Unlimited.

I put the books into KU for the initial 90 day period to see how things went, and now that period is up I've decided to continue it.
4 likes · Like  •  0 comments  •  flag

A quick heads-up that I forgot in my hurry to prep for a trip last week: Going Grey and Black Run, the first two books in my Ringer series, are now on Kindle Unlimited.

So is View Of A Remote Country, which is an anthology of my short stories, from the olden days when I still wrote short form. It's a mix of SF and fantasy, and I haven't revised or tidied up any of the stories. They appear as they were published. Actually, one of them might well be unpublished: all this happened so long ago that I couldn't recall what I did with some of them, and there may well be stories I didn't include because the file wasn't there.

I published View Of A Remote Country as a courtesy for readers who asked me where they could find my short fiction. As some of the publications had gone the way of the dodo, and others didn't have back copies, it seemed quicker and easier to just find what I could in my files and assemble it into a book, something that wasn't feasible before KDP. This is ancient stuff, and the antho's been out for five years, but the sales seem to have taken off lately. I'm not sure why. If I knew, I'd exploit it...

Anyway, if you have Kindle Unlimited, all three books are on there, along with The Best Of Us, to be joined by more novels soon.
3 likes · Like  •  0 comments  •  flag

THE BEST OF US is out in audiobook exclusively from Audible today. 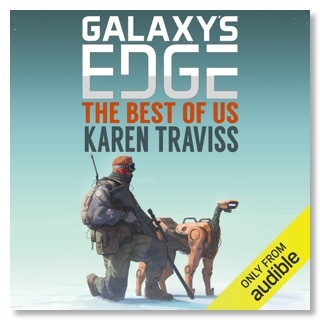 THE BEST OF US is now available from Barnes & Noble in paperback and hardcover.
1 like · Like  •  0 comments  •  flag

Out now - THE BEST OF US

THE BEST OF US, book one of the Nomad trilogy, is on sale now on Amazon US and Amazon UK. (Hardcover, paperback, and Kindle exclusive.)

The Audible exclusive audiobook is out on November 12.


You can also order the book from Barnes & Noble or your local bookstore:

Subscribe to my news bulletin for details and news about the sequels.

You can pre-order the Kindle edition of THE BEST OF US now & get it delivered to your device on Oct 29.

(Paperback & hardcover go on sale Oct 29,, and the Audible exclusive audiobook on Nov 12.)

Meet the cast of THE BEST OF US

Things are going to get complicated in my new series, starting with THE BEST OF US, so if you're on my news mailing list you'll be getting an early introduction to some of the main characters today.

Excerpt from THE BEST OF US for newsletter subscribers

If you’re a person of taste and you’re on my news mailing list, you’ll be getting a preview from THE BEST OF US this week. (Out October 29.)

THE BEST OF US – out this month

My new series goes on sale on October 29, available Kindle, Audible, and print. THE BEST OF US is the first book in the Nomad trilogy. Pre-orders open on Amazon on October 26.

I'm collaborating with fellow indie authors Jason Anspach and Nick Cole in their Galaxy's Edge universe and my books are what you might call the medieval history of the Anspach and Cole books, set a thousand years earlier and chronicling how humans end up colonising the galaxy. THE BEST OF US opens on an Earth you'll find familiar a couple of centuries from today, and you'll see what drives us to leave Earth and who makes it happen. The West has been devastated by epidemics, bio-terrorism, war, and famine. Asia has shut its borders to keep the threats at bay, and some with power and influence have already abandoned Earth. Now an escape route a century in the making – the Nomad mission – finally offers hope to a small town and a secret research centre hidden in a rural American backwater. Are humans worthy of this salvation? A unique AI has the task of deciding who's worth saving – who represents the best of us.

For those of you who know all my books, this will appeal to both Wess'har fans and my Halo readers. Military life, moral dilemmas, hard choices that don't work out so well, and ordinary people who are called upon to do extraordinary things.

In the run-up to the launch date, I'll be sending previews, behind-the-scenes info, and introductions to the characters to those of you who are on my news bulletin list. If you haven't signed up for my newsletter, now's a good time to do it here. I don't mail out a lot, so you won't be swamped with junk, but when I've got new stories out, it'll be stuff that you'll want to see.
View more on Karen Traviss's website »
2 likes · Like  •  0 comments  •  flag

I regularly encourage aspiring writers to check out anime if they want to see storytelling polished to the nth degree. I know many people will ignore that and see only "cartoons" that are beneath them, but that's their loss. Good storytelling isn't about your dazzling use of the subjunctive, but about putting the person being told the story into the world you're describing and into the minds of the characters within in. Writing style's important, because it can be a barrier to recreating that world, and linguistic rhythm can rmake it easier for the reader to step into it, but the core elements of storytelling are common to visual arts as well, and we can learn from all of them.

I've honed my skills far more from working with comic artists, animators, illustrators, and TV directors than I ever have from writers. (I don't read fiction, as you know by now.) And a perfect example of what anime can teach you can be found in Dr Stone, a series about a remnant of modern humanity waking from a disaster that left them in suspended animation (I won't spoil the backstory here) to find a depopulated Earth that's reverted to the Stone Age in their millennia-long absence. Much of the story so far is about how Senku, a high-IQ teen who lives and breathes science, sets himself a personal mission to restore science and technology for the good of mankind. Those who've survived the disaster have lost family and friends. If that sounds unoriginal to you, you haven't seen the story treatment. It's clever, it's educational, and the top dressing of anime staples peels back, as it so often does, to reveal a foundation of heavyweigfht moral dilemmas and complex characterisation.

Anyway, data bursts. The point of this blog is a few seconds in episode 11 that made me want to stand and applaud. My stock in trade in characterisation and when I see it done brilliantly, I savour it. I'll just describe what it was, and what it could have been in the hands of lesser storytellers. It was quick, elegant, and moving. Once you think it through, you'll see how to apply it to ratchet your own work up a notch.

Senku, the ultimate STEM polymath, developed an obsession with science as a small child, and he's shown a Stone Age tribe how to work metal and generate electricity. Now he's shown them how to make glass. It's a necessity if they want to progress to making chemicals and medicines. He's standing in the doorway of a primitive hut looking into his new laboratory, which now has glass beakers, retorts, and test tubes on the rustic shelves. He's smiling, satisfied with what he and the tribespeople have achieved.

And then you see his moment of flashback. He's a little boy again, walking into his bedroom to find that it's crammed full of every scientific device and book that can be bought for a child, equipment that's long vanished from Earth. The items are all wrapped in paper and bows. It's an Aladdin's cave of discovery for an insatiably curious little boy.

Then the scene cuts back to his face in the present day. There's a hint of sorrow, and it's clearly a bittersweet memory for him. Whatever the anime's creators intended (and I don't know the answer to that) those few seconds said everything to me: he's remembering his parents and what he's lost. The anime could have shown the items unwrapped and cut back to Senku still smiling, to indicate that his passion for science was forged in early childhood and that his effort wasn't wasted: this was the path he was born for. Instead, it shows his joy at seeing gifts and that the memory's painful. His parents gave him all that and made him the potential saviour of humanity's future that he's become, but now they're gone. It still says he has a destiny, but it also tells you everything about his relationship with his family, and that there's a lot more beneath the veneer of smug confidence and apparently cold objectivity. And it does all this in seconds.

In storytelling, the devil is in the details. You don't need a page of description, and you don't need to spell things out to the reader or audience with the aid of a sledgehammer. One perfect observation that all humans can relate to or at least understand is worth a chapter of introspection. The hard work is finding that gem, of course, but the more attention you pay to people in real life, the more you'll spot these things.

Dr Stone is a brilliant piece of storytelling in many other ways, but that's for another day. If you're not a writer, you don't have to dissect it professionally lthe way I do to enjoy it. It's hugely entertaining. Just be aware of how much is going on under the surface to achieve that. Stunning work, the stuff of which joy is made.
View more on Karen Traviss's website »
3 likes · Like  •  0 comments  •  flag