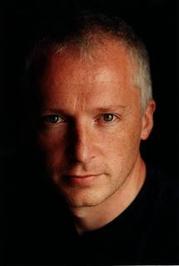 Born
in London, The United Kingdom
August 26, 1965
Twitter
MarcusduSautoy
Genre
Science, Mathematics
edit data
Marcus Peter Francis du Sautoy, OBE is the Simonyi Professor for the Public Understanding of Science and a Professor of Mathematics at the University of Oxford.

“Mathematics has beauty and romance. It's not a boring place to be, the mathematical world. It's an extraordinary place; it's worth spending time there.”
― Marcus du Sautoy
18 likes
Like

“One of the most curious consequences of quantum physics is that a particle like an electron can seemingly be in more than one place at the same time until it is observed, at which point there seems to be a random choice made about where the particle is really located. Scientists currently believe that this randomness is genuine, not just caused by a lack of information. Repeat the experiment under the same conditions and you may get a different answer each time.”
― Marcus du Sautoy, The Great Unknown: Seven Journeys to the Frontiers of Science
tags: believe, choice, conditions, consequences, curious, different, electron, genuine, information, located, location, observed, particle, quantum-field-theory, quantum-physics, random, randomness, repeat, science, scientists
4 likes
Like

“The wave quality of light is the same as that of the electron. The wave determines the probable location of the photon of light when it is detected. The wave character of light is not vibrating stuff like a wave of water but rather a wavelike function encoding information about where you'll find the photon of light once it is detected. Until it reaches the detector plate, like the electron, it is seemingly passing through both slits simultaneously, making its mind up about its location only once it is observed [...].
It's this act of observation that is such a strange feature of quantum physics. Until I ask the detector to pick up where the electron is, the particle should be thought of as probabilistically distributed over space, with a probability described by a mathematical function that has wavelike characteristics. The effect of the two slits on this mathematical wave function alters it in such a way that the electron is forbidden from being located at some points on the detector plate. But when the particle is observed, the die is cast, probabilities disappear, and the particle must decide on a location.”
― Marcus du Sautoy, The Great Unknown: Seven Journeys to the Frontiers of Science
tags: characteristics, decision, detected, detection, detector, distributed, electron, encoding, feature, forbidden, function, information, light, location, observation, observed, particle, photon, probabilistically, probability, quantum-field-theory, quantum-physics, slits, space, strange, wave, wavelike
2 likes
Like

Is this you? Let us know. If not, help out and invite Marcus to Goodreads.