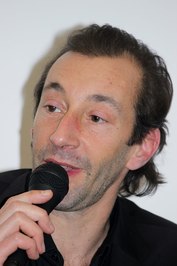 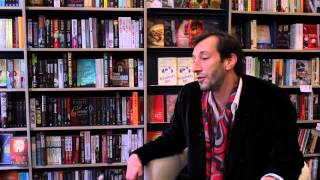 His first novel "The Portrait" was published in 2007 and he achieved wide international acclaim with "The Red Notebook". Since then his works have been translated into 14 languages and partly made into films. Antoine Laurain (born 1972) is a French author. He previously worked as a screenwriter and antiques dealer.

His first novel "The Portrait" was published in 2007 and he achieved wide international acclaim with "The Red Notebook". Since then his works have been translated into 14 languages and partly made into films. ...more

“If there was one thing that defined adolescence it was hysterical laughter. You never laughed like that again. In adolescence the brutal realisation that the world and life were completely absurd made you laugh until you couldn’t catch your breath, whereas in later life it would only result in a weary sigh.”
― Antoine Laurain, The Red Notebook
38 likes
Like

“How many things do we feel obliged to do for the sake of it, or for appearances, or because we are trained to do them, but which weigh us down and don’t in fact achieve anything?”
― Antoine Laurain, The Red Notebook
34 likes
Like

“That was exactly what Tabucchi was suggesting with his title ("La Nostalgie du Possible") --that we can pass right by something very important: love, a job, moving to another city or another country. Or another life. 'Pass by' and at the same time be 'so close' that sometimes, while in that state of melancholy that is akin to hypnosis, we can, in spite of everything, manage to grab little fragments of what might have been. Like catching snatches of a far-off radio frequency. The message is obscure, yet by listening carefully you can still catch snippets of the soundtrack of the life that never was. You hear sentences that were never actually said, you hear footsteps echoing in places you've never been to, you can make out the surf on a beach whose sand you have never touched. You hear the laughter and loving words of a woman though nothing ever happened between you. The idea of an affiar with her had crossed your mind. Perhaps she would have liked that --probably, in fact-- but nothing every happened. For some unknown reason, we never gave in to the exquisite vertigo that you feel when you move those few centimeters towards the face of the other for the first kiss.”
― Antoine Laurain, The Red Notebook
20 likes
Like

by Joe Hill
From the award-winning, New York Times bestselling author of NOS4A2 and Heart-Shaped Box comes a chilling novel about a worldwide pandemic of spontaneous combustion that threatens to reduce civilization to ashes and a band of improbable heroes who battle to save it, led by one powerful and enigmatic man known as the Fireman.
3 votes 50.0%
My Grandmother Asked Me to Tell You She's Sorry

by Fredrik Backman
From the author of the internationally bestselling 'A Man Called Ove', a novel about a young girl whose grandmother dies and leaves behind a series of letters, sending her on a journey that brings to life the world of her grandmother's fairy tales.
1 vote 16.7%
The Bazaar of Bad Dreams

by Stephen King
A master storyteller at his best—the O. Henry Prize winner Stephen King delivers a generous collection of stories, several of them brand-new, featuring revelatory autobiographical comments on when, why, and how he came to write (or rewrite) each story.
1 vote 16.7%
The Red Notebook

by Antoine Laurain
Heroic bookseller Laurent Letellier comes across an abandoned handbag on a Parisian street. There's nothing in the bag to indicate who it belongs to, although there's all sorts of other things in it. Laurent feels a strong impulse to find the owner and tries to puzzle together who she might be from the contents of the bag. Especially a red notebook with her jottings, which really makes him want to meet her. Without even a name to go on, and only a few of her possessions to help him, how is he to find one woman in a city of millions?
1 vote 16.7%
Redemption Road

by John Hart
A boy with a gun waits for the man who killed his mother.

A troubled detective confronts her past in the aftermath of a brutal shooting.

After thirteen years in prison, a good cop walks free. But for how long?

And deep in the forest, on the altar of an abandoned church, the unthinkable has just happened…

This is a town on the brink. This is a road with no mercy.
0 votes 0.0%
6 total votes
comments and details
Sign in to vote »

Is this you? Let us know. If not, help out and invite Antoine to Goodreads.