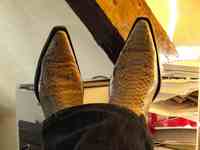 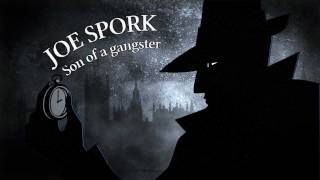 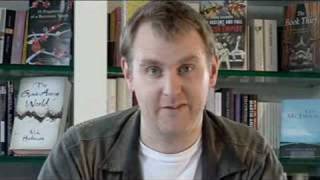 Nick Harkaway was born in Cornwall, UK in 1972. He is possessed of two explosively exciting eyebrows, which exert an almost hypnotic attraction over small children, dogs, and - thankfully - one ludicrously attractive human rights lawyer, to whom he is married.

The way you fix it is you go back to the beginning and you get rid of all the junk, broken stuff you put in back before you understood what the hell the book was actually about, the stuff that is now preventing you from doing the really amazing things that will make the book special. You have to re-envision the whole thing, understand what you meant but could not at the time express. Sometimes that means cutting heavily, sometimes it means changing great swathes, sometimes it's a question of reading that crucial passage that carries your book in potential and taping it up over your desk.

Calling that moment "writer's block" is slandering yourself. It's not a block, it's the process. Don't demonise it! Beg for it! It's what stops you from writing lousy prose, saggy plots, unsatisfying endings. LOVE YOUR CRITICAL FACULTY.

Alternatively: at any time in the course of a book, I may find I cannot write it, bash away at it, hate myself, and then realise it's because I haven't done my chores. I haven't paid the credit card bill or whatever.

Understand: your ability to write is bound up with who you are and with your moods. It is tied to whether you are happy, sad, tense, relaxed, blah. It is you. So when something is wrong with your inkflow, that means either that you've goofed creatively or that you're not fixing something broken elsewhere in your world.

Love your mutant power. Do not try to force it to do something. Learn to listen.(less)
flag

Briane Pagel This sounds like what Obi Wan might have told Luke if Obi Wan had been stuck in traffic for a while before they talked.
May 28, 2015 08:19PM

But every so often ideas collide and produce something exciting, and then it's not a question of persuading myself to write, but of budgeting time to do other things like eat.

Where ideas come from... I think that's about taking the brakes off your mind. We're all trained as kids to stop thinking the ridiculous things and be sensible, and writing is about recapturing the possibility that there are invisible mousemonsters that sneak onto buses and chew the furniture and they are kept in line by a young woman with a magic accordion. It's about permitting yourself to touch the weird in search of the amazing.(less)
flag
View 2 comments
See all 19 answers from Nick Harkaway…

My new book, Tigerman, is coming out on May 22nd in the UK, June 2nd in Australia and July 29th in the US.

(Sorry, Americans: I do try, every time, to get them all sync'd, but the publishing industry doesn't take to it.)

Interview with Nick Harkaway
On a radioactive island a middle-aged British sergeant becomes a crime-fighting superhero in Tigerman, a genre-bending adventure from the author of...
Read more...
10 likes · 3 comments
Quotes by Nick Harkaway  (?)
Quotes are added by the Goodreads community and are not verified by Goodreads. (Learn more)
“I love you forever. I am sorry I cannot love you now.”
― Nick Harkaway, Angelmaker
tags: forever, heartache, heartbreak, love, love-hurts, love-letter, lovers
69 likes
Like

“People don't want children to know what they need to know. They want their kids to know what they ought to need to know. If you're a teacher you're in a constant battle with mildly deluded adults who think the world will get better if you imagine it is better. You want to teach about sex? Fine, but only when they're old enough to do it. You want to talk politics? Sure, but nothing modern. Religion? So long as you don't actually think about it. Otherwise some furious mob will come to your house and burn you for a witch.”
― Nick Harkaway, The Gone-Away World
tags: children, controversy, education, idealism, ignorance, knowledge, naivete, politics, reality, religion, school, school-system, sex, teachers, teaching
44 likes
Like

“I have known heaven, and now I am in hell, and there are mimes.”
― Nick Harkaway, The Gone-Away World
tags: mimes
41 likes
Like

“A man breaking his journey between one place and another at a third place of no name, character, population or significance, sees a unicorn cross his path and disappear. That in itself is startling, but there are precedents for mystical encounters of various kinds, or to be less extreme, a choice of persuasions to put it down to fancy; until--"My God," says a second man, "I must be dreaming, I thought I saw a unicorn." At which point, a dimension is added that makes the experience as alarming as it will ever be. A third witness, you understand, adds no further dimension but only spreads it thinner, and a fourth thinner still, and the more witnesses there are the thinner it gets and the more reasonable it becomes until it is as thin as reality, the name we give to the common experience... "Look, look!" recites the crowd. "A horse with an arrow in its forehead! It must have been mistaken for a deer.”
― Tom Stoppard, Rosencrantz and Guildenstern Are Dead
tags: experience, mystical-encounter, reality, unicorn
75 likes
Like