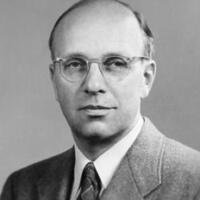 Born
in Huron, South Dakota, The United States
May 24, 1907
Died
September 14, 1991
Genre
History
edit data
John King Fairbank (1907 – 1991) was an American historian of China and United States-China relations. He taught at Harvard University from 1936 until his retirement in 1977. He is credited with building the field of China studies in the United States after World War II with his organizational ability, his mentorship of students, support of fellow scholars, and formulation of basic concepts to be tested.
The Fairbank Center for Chinese Studies at Harvard is named after him.

· 5,359 ratings · 339 reviews · 60 distinct works • Similar authors
More books by John King Fairbank…
Quotes by John King Fairbank  (?)
Quotes are added by the Goodreads community and are not verified by Goodreads. (Learn more)
“The simple facts of Mao’s career seem incredible: in a vast land of 400 million people, at age 28, with a dozen others, to found a party and in the next fifty years to win power, organize, and remold the people and reshape the land–history records no greater achievement. Alexander, Caesar, Charlemagne, all the kings of Europe, Napoleon, Bismarck, Lenin–no predecessor can equal Mao Tse-tung’s scope of accomplishment, for no other country was ever so ancient and so big as China. Indeed Mao’s achievement is almost beyond our comprehension.”
― John King Fairbank, The United States and China
tags: inspirational
5 likes
Like