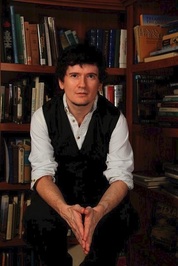 James hasn't connected with his friends on Goodreads, yet.

Using his skill as a researcher, James extensively documented a case of identity theft and bigamy for the book Destiny in Texas. He is also the author of Blood Legacy: The True Story of the Snow Axe Murders, Sins of the Pioneers, a An award-winning writer, James Pylant is the author of a family-authorized celebrity biography, In Morticia's Shadow: The Life & Career of Carolyn Jones. He has also interviewed several famous personalities, including Robert Englund (Nightmare on Elm Street), Dan Bucatinsky (Scandal), Audrey Landers (Dallas), Ruth Buzzi (Laugh-In), Peter Mark Richman (Dynasty), Linda Purl (Matlock), Stanley Livingston (My Three Sons), Mother Dolores Hart (King Creole), Dr. Henry Louis Gates (Finding Your Roots), among many others.

Using his skill as a researcher, James extensively documented a case of identity theft and bigamy for the book Destiny in Texas. He is also the author of Blood Legacy: The True Story of the Snow Axe Murders, Sins of the Pioneers, and co-wrote The Oldest Profession in Texas. His book, Texas Gothic: Fame, Crime & Crazy Water, won first place in the 2016 North Texas Book Festival Book Awards for Adult Non-Fiction.

A former contest judge for the International Society of Family History Writers and Editors, James wrote for The Bottom Line, Family Chronicle, and Ancestry. He currently serves as editor of GenealogyMagazine.com, a source utilized by wikipedia.org, the Texas Historical Commission, and Learning and Teaching Scotland’s SCET.NET for History: A Virtual Department.
...more

Oh, by the way, my wife was hacked to death last night

[image error]
In 1910, an 81-year-old named Benjamin Franklin Matthews—called Frank—and his 71-year-old wife, Millie, lived on their farm in Cedar, a township in Boone County, Missouri. The federal census that year indicates that a servant made her home with them; yet, by 1914 they lived alone. The couple’s only two children, both sons, were seven years apart in age. Albert, the oldest, was bor Read more of this blog post »
View more on James Pylant's website »
Like  •  0 comments  •  flag

Obsessed with True Crime — 3361 members — last activity 1 hour, 36 min ago
For people that simply love true crime stories and want to connect with others that share a common interest.

Memoirs and Biographies We Love — 1355 members — last activity May 12, 2020 09:34AM
A place to share memoirs, biographies, autobiographies (and maybe even fiction-based-in-reality) that you have enjoyed!

Jeannette Walls
author of
The Glass...