,
Discover new books on Goodreads
See if your friends have read any of Sarah Ruden's books 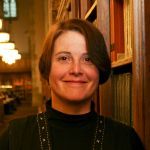 · 37,641 ratings · 1,243 reviews · 20 distinct works • Similar authors
More books by Sarah Ruden…
Quotes by Sarah Ruden  (?)
Quotes are added by the Goodreads community and are not verified by Goodreads. (Learn more)
“A slave was, in Greek or Roman eyes, absolutely limited as to the consideration anyone (even a god) could show for him. Even if freed, he would always be treated as a social, civic, and spiritual inferior. A runaway had no right to any consideration at all. Deploying Christian ideas against Greco-Roman culture, Paul joyfully mocks the notion that any person placing himself in the hands of God can be limited or degraded in any way that matters. The letter must represent the most fun anyone ever had writing while incarcerated. The letter to Philemon may be the most explicit demonstration of how, more than anyone else, Paul created the Western individual human being, unconditionally precious to God and therefore entitled to the consideration of other human beings.”
― Sarah Ruden, Paul Among the People: The Apostle Reinterpreted and Reimagined in His Own Time
1 likes
Like

“These languages were not like modern globalized ones, serving mainly to convey information in explicit and interchangeable forms-- but with a dimension called 'style' for artistic uses on the side. Instead the original Bible was, like all of ancient rhetoric and poetry, primarily a set of live performances and what they meant was tightly bound up in the way they meant it...this degree of difference can prevail when the Bible is translated without attention to its original forms particularly those that inform its striking and moving expressiveness-- that is, its beauty. Almost literally, if we can't dance to it, we don't understand it.”
― Sarah Ruden, The Face of Water: A Translator on Beauty and Meaning in the Bible
1 likes
Like

“the Gospels are not about Jesus; they are Jesus.”
― Sarah Ruden, The Gospels
0 likes
Like