Goodreads helps you follow your favorite authors. Be the first to learn about new releases!
Start by following Veronica Roth.
Follow Author

'Well,' he says, 'I would only go if there was cake.”
― Veronica Roth, Divergent

5719 likes
Like
“Fear doesn't shut you down; it wakes you up”
― Veronica Roth, Divergent
tags: divergent, fear
5592 likes
Like
“Sometimes crying or laughing are the only options left, and laughing feels better right now.”
― Veronica Roth, Divergent
tags: crying, laughter, options
5539 likes
Like
“I have something I need to tell you," he says. I run my fingers along the tendons in his hands and look back at him. "I might be in love with you." He smiles a little. "I'm waiting until I'm sure to tell you, though."
"That's sensible of you," I say, smiling too. "We should find some paper so you can make a list or a chart or something."
I feel his laughter against my side, his nose sliding along my jaw, his lips pressing my ear.
"Maybe I'm already sure," he says, "and I just don't want to frighten you."
I laugh a little. "Then you should know better."
"Fine," he says. "Then I love you.”
― Veronica Roth, Divergent

He leans his face close to mine and wraps his fingers around my chin. His hand smells like metal. When was the last time he held a gun, or a knife? My skin tingles at the point of contact, like he's transmitting electricity through his skin.

"My first instinct is to push you until you break, just to see how hard I have to press." he says, his fingers squeezing at the word break. My body tenses at the edge in his voice, so I am coiled as tight as a spring, and I forget to breathe.

His dark eyes lifting to mine, he adds, "But I resist it."

"Fear doesn't shut you down; it wakes you up. I've seen it. It's fascinating." He releases me but doesn't pull away, his hand grazing my jaw, my neck. "Sometimes I just want to see it again. Want to see you awake.”
― Veronica Roth, Divergent


tags: chivalry
3449 likes
Like
“Then I realize what it is. It's him. Something about him makes me feel like I am about to fall. Or turn to liquid. Or burst into flames.”
― Veronica Roth, Divergent
tags: love
3377 likes
Like
“I suppose a fire that burns that bright is not meant to last.”
― Veronica Roth, Allegiant
tags: four, heartbreaking, tobias
3355 likes
Like
“Politeness is deception in pretty packaging.”
― Veronica Roth, Divergent
3268 likes
Like
“I fell in love with him. But I don't just stay with him by default as if there's no one else available to me. I stay with him because I choose to, every day that I wake up, every day that we fight or lie to each other or disappoint each other. I choose him over and over again, and he chooses me.”
― Veronica Roth, Allegiant
tags: agency, choices, love
3189 likes
Like
“There are so many ways to be brave in this world. Sometimes bravery involves laying down your life for something bigger than yourself, or for someone else. Sometimes it involves giving up everything you have ever known, or everyone you have ever loved, for the sake of something greater.

But sometimes it doesn't.

Sometimes it is nothing more than gritting your teeth through pain, and the work of every day, the slow walk toward a better life.

That is the sort of bravery I must have now.”
― Veronica Roth, Allegiant

"Not just a cloud of moths," she says, "like...a swarm of them. Everywhere. All those wings and legs and..." She shudders and shakes her head.

"Terrifying," Will says with mock seriousness. "That's my girl. Tough as cotton balls."

We’d love your help. Let us know what’s wrong with this preview of Divergent by Veronica Roth.

We’d love your help. Let us know what’s wrong with this preview of Allegiant by Veronica Roth.

We’d love your help. Let us know what’s wrong with this preview of Four by Veronica Roth. 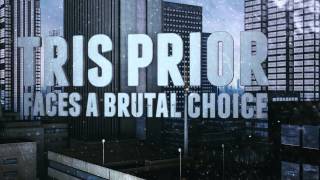