Goodreads helps you follow your favorite authors. Be the first to learn about new releases!
Start by following Frederick Douglass.
Follow Author

I answer: a day that reveals to him, more than all other days in the year, the gross injustice and cruelty to which he is the constant victim. To him, your celebration is a sham; your boasted liberty, an unholy license; your national greatness, swelling vanity; your sounds of rejoicing are empty and heartless; your denunciation of tyrants, brass-fronted impudence; your shouts of liberty and equality, hollow mockery; your prayers and hymns, your sermons and thanksgivings, with all your religious parade and solemnity, mere bombast, fraud, deception, impiety, and hypocrisy-a thin veil to cover up crimes which would disgrace a nation of savages.”
― Frederick Douglass

tags: abolition, activism, agitation, dissent, human-rights, liberties, politics, power, radicalism, rights, slavery, suffrage
142 likes
Like
“Power concedes nothing without a demand. It never did and it never will.”
― Frederick Douglass
tags: power
130 likes
Like
“I would unite with anybody to do right and with nobody to do wrong.”
― Frederick Douglass
120 likes
Like
“Slaves are generally expected to sing as well as to work.”
― Frederick Douglass
tags: freedom, justice, oppression, slavery
112 likes
Like
“It is not light that we need, but fire; it is not the gentle shower, but thunder. We need the storm, the whirlwind, and the earthquake.”
― Frederick Douglass
112 likes
Like
“I have observed this in my experience of slavery, - that whenever my condition was improved, instead of its increasing my contentment, it only increased my desire to be free, and set me to thinking of plans to gain my freedom. I have found that, to make a contented slave, it is necessary to make a thoughtless one. It is necessary to darken his moral and mental vision, and, as far as possible, to annihilate the power of reason. He must be able to detect no inconsistencies in slavery; he must be made to feel that slavery is right; and he can be brought to that only when he ceased to be a man.”
― Frederick Douglass, Narrative of the Life of Frederick Douglass
tags: frederick-douglass, slavery
106 likes
Like
“Let me give you a word of the philosophy of reform. The whole history of the progress of human liberty shows that all concessions yet made to her august claims, have been born of earnest struggle. The conflict has been exciting, agitating, all-absorbing, and for the time being, putting all other tumults to silence. It must do this or it does nothing. If there is no struggle there is no progress. Those who profess to favor freedom and yet depreciate agitation, are men who want crops without plowing up the ground, they want rain without thunder and lightening. They want the ocean without the awful roar of its many waters."

"This struggle may be a moral one, or it may be a physical one, and it may be both moral and physical, but it must be a struggle. Power concedes nothing without a demand. It never did and it never will. Find out just what any people will quietly submit to and you have found out the exact measure of injustice and wrong which will be imposed upon them, and these will continue till they are resisted with either words or blows, or with both. The limits of tyrants are prescribed by the endurance of those whom they oppress. In the light of these ideas, Negroes will be hunted at the North, and held and flogged at the South so long as they submit to those devilish outrages, and make no resistance, either moral or physical. Men may not get all they pay for in this world; but they must certainly pay for all they get. If we ever get free from the oppressions and wrongs heaped upon us, we must pay for their removal. We must do this by labor, by suffering, by sacrifice, and if needs be, by our lives and the lives of others.”
― Frederick Douglass

99 likes
Like
“The American people have this to learn: that where justice is denied, where poverty is enforced, where ignorance prevails, and where any one class is made to feel that society is an organized conspiracy to oppress, rob, and degrade them, neither person nor property is safe.”
― Frederick Douglass
96 likes
Like
“Power concedes nothing without a demand. It never did and it never will. Find out just what any people will quietly submit to and you have found out the exact measure of injustice and wrong which will be imposed upon them, and these will continue till they are resisted with either words or blows, or with both. The limits of tyrants are prescribed by the endurance of those whom they oppress.”
― Frederick Douglass
95 likes
Like
“Slaves sing most when they are most unhappy. The songs of the slave represent the sorrows of his heart; and he is relieved by them, only as an aching heart is relieved by its tears.”
― Frederick Douglass, Narrative of the Life of Frederick Douglass
tags: slavery
92 likes
Like
“The more I read, the more I was led to abhor and detest my enslavers. I could regard them in no other light than a band of successful robbers, who had left their homes, and gone to Africa, and stolen us from our homes, and in a strange land reduced us to slavery. I loathed them as being the meanest as well as the most wicked of men. As I read and contemplated the subject, behold! that very discontentment which Master Hugh had predicted would follow my learning to read had already come, to torment and sting my soul to unutterable anguish. As I writhed under it, I would at times feel that learning to read had been a curse rather than a blessing. It had given me a view of my wretched condition, without the remedy. it opened my eyes to the horrible pit, but to no ladder upon which to get out. in moments of agony, I envied my fellow-slaves for their stupidity. I have often wished myself a beast. I preferred the condition of the meanest reptile to my own. Any thing, no matter what, to get rid of thinking! It was this everlasting thinking of my condition that tormented me. There was no getting rid of it. It was pressed upon me by every object within sight or hearing, animate or inanimate. The silver trump of freedom had roused my soul to eternal wakefulness. Freedom now appeared, to disappear no more forever. It was heard in every sound and seen in every thing. It was ever present to torment me with a sense of my wretched condition. I saw nothing without seeing it, I heard nothing without hearing it, and felt nothing without feeling it. It looked from every star, it smiled in every calm, breathed in every wind, and moved in every storm.”
― Frederick Douglass, Narrative of the Life of Frederick Douglass
tags: education, frederick-douglass, reading, slavery
76 likes
Like
“No man can put a chain about the ankle of his fellow man without at last finding the other end fastened about his own neck.”
― Frederick Douglass
75 likes
Like
“The marriage institution cannot exist among slaves, and one sixth of the population of democratic America is denied it's privileges by the law of the land. What is to be thought of a nation boasting of its liberty, boasting of it's humanity, boasting of its Christianity, boasting of its love of justice and purity, and yet having within its own borders three millions of persons denied by law the right of marriage?”
― Frederick Douglass, My Bondage and My Freedom
tags: marriage, racism, same-sex-marriage
63 likes
Like
“A gentleman will not insult me, and no man not a gentleman can insult me.”
― Frederick Douglass
63 likes
Like
“I assert most unhesitatingly, that the religion of the south is a mere covering for the most horrid crimes, - a justifier of the most appalling barbarity, - a sanctifier of the most hateful frauds, - and a dark shelter under, which the darkest, foulest, grossest, and most infernal deeds of the slaveholders find the strongest protection. Were I to be again reduced to the chains of slavery, next to enslavement, I should regard being the slave of a religious master the greatest calamity that could befall me. For of all slaveholders with whom I have ever met, religious slaveholders are the worst. I have ever found them the meanest and basest, the most cruel and cowardly, of all others.”
― Frederick Douglass, Narrative of the Life of Frederick Douglass
tags: christianity, frederick-douglass, religion, slavery
49 likes
Like
“In a composite nation like ours, as before the law, there should be no rich, no poor, no high, no low, no white, no black, but common country, common citizenship, equal rights and a common destiny.”
― Frederick Douglass
48 likes
Like

Narrative of the Life of Frederick Douglass
94,110 ratings
Open Preview

My Bondage and My Freedom
10,560 ratings
Open Preview

We’d love your help. Let us know what’s wrong with this preview of My Bondage and My Freedom by Frederick Douglass.

Preview — My Bondage and My Freedom by Frederick Douglass

Narrative of the Life of Frederick Douglass, an American Slave / Incidents in the Life of a Slave Girl
1,142 ratings
Open Preview

We’d love your help. Let us know what’s wrong with this preview of Autobiographies by Frederick Douglass. 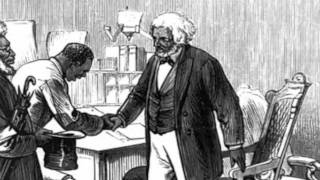